what we see - and what we fear

Images. We think scalpels and opened bodies. Strangers veiled in the clinical white and green of intensive care units, their benevolent yet faceless spirits hunched over exposed bodies in earnest. Loss of control. We’re reminded of ailment and injury. We recall faith and healing.

All quiet on the western front. And east, south and the north. Today, as 11,000 years ago: whence existential calamity tangled with man, with both individuals and the entire collective. Whence the forces of nature turned against us and malady - invisible, supernatural beings’ creation - agonized us. Reminded of his own exposure and vulnerability time and again, man felt small.

what we're able to do

But he and she and it wouldn’t be human, vulnerable indeed – and highly robust -, would she and it and he ponder mere acquiescence. Man’s fortitudes’ failure gives way for another to take the reins. A man ought to transform himself! Medicine-women and -men, healers, shamans; witch doctors and magicians reached for the mask. These particular ways of being, embodied through inner experience, were means by which we came eye to eye with higher forces – a gateway opened beyond meaningful facial ornamentations toward a second reality, a second life imbued with power: homunculus now a spirit, a demon, occasionally a deity. The dead came alive. We grew wings as travelers in the beyond. Masks were imbued with magical shelter. In due use, many a mask gained in fortitude and saw countless faces.

Then as now, the matter extended beyond curative care. Individual fate was fate of the collective - a manner which also pertained to the cure. Then as now, borderline situations were the concern. Existential moments of human life. Countless feelings – and feelings countless. Concern for their recognition and expression.

Sometimes we veiled the face, site of the recognizable share of the I, till this I regained enough space for the Other: grasping oneself as a unit irrespective of all particulars. May we recall cultic celebrations in honor of an untamed Greek deity, from whose dust we arose. We know it was said to have been a rowdy occasion: Dionysus was involved!

Forget senseless delirium and licentious idling – in ritual collective rather, meaning in cultivated emotional frenzy, in whose reciprocal interwovenness the collective experienced itself in the truest sense of the word: masks, which obscured individuals, accomplished collectively conjured ecstasy. For long, our fore-fore-fathers knew of everywhere: I - well we - don’t expire at our skin. The basic structure of emotions is ecstatic - our own feelings not as private as we think.

In and through feeling with others, emotions are - always - already minted and shaped. This “with” is constituted by their being in tension - fateful for all individuals.

Affectivity as wholly primal, ecstasis, ecstare: coming outside oneself as augmented I. An I  which decisively points beyond itself – not into a void, not into solipsistic captivity, not into brutalized hostility to life. Let alone asceticism! By Dionysus, no. It reaches beyond itself and into co-human, thus human affinity. Say now, anyone, this were not reasonable.

He wouldn’t say art were amalgamated with reason either. From the outset: whoever is tortured by such jumbled thoughts … not all there. Our commiserations. Instead of comforting mathematical gestures, art accepts all sentimental sorts into its commission. The basic structure of art is: ecstatic. Its standing-out into the most intimate, vulnerable, transforming; into the vigorous and playful … into the sublime of human emotions as it were, is its trade, one way or another.

And yet on opening its mouth, it lies. Its means have always been conditioned like this - to wrest a scrap of visibility from the invisible; to wrest what could’ve otherwise gone unseen off of the visible. When that which it summons up and creates comes alive, it only appears that way. Or else it’d be god knows what.

“What’s the use?”, say those who’ve already denied it any reason.

They know not, how something inspirited by man is already self-sufficient – by merely existing. As if this “merely” were one of commiseration, and not of that unconditional necessity of merely being there. Irrespective of circumstance, day and night.

In this, art relates to a biological gesture - an existential one. To live in the veneer of something real is at times only afforded by life. Survival!, Nietzsche’s dedicated chameleon exulted: the appearance of art - the artificial appearance - is both veil and breath of light. While all have no space in reality, places are found in its appearance. This is very reasonable.

And: art has its own instruments. It is infinite. Lately, it gained something: protective masks. Unwanted, naturally. This is good. Since unwanted-and-there-nonetheless is one of art’s specialized fields. It must, if it so wants … now direct both its veiling and exposing moments onto a rough-material object, which will – in the near future - veil us and reveal many a thing. Unhoped for. A pretty game!

Images. It’s possible that our Mask 2020 will not have only been a sterile rag which estranged us. Maybe we’ll also associate the conceptual field of the protective mask - resentment-loaded trepidation aside – with those images of a collectively molded event: with masks, which didn’t merely paralyze but, rather, moved us?

It’s about protection via veil, via the unity of the many, effected for individuals, which we (when we’re not especially occupied by Dionysian self-finding trips) often and justly are in everyday life. It’s about our vis-ability despite veiled faces – visibility and affinity, by virtue of a veil: about the affirmation of our life, which - prospectively - we’ll not only have viewed in expressive masks. In our faces, too.

In this sense, the protective mask tells a tale of individual humans as congregation into an irrepressible unity: in great defiance and robust against an invisible hybrid creature, with both the pretty and haughty name of Corona. Who wouldn’t want to proclaim a carnival right away, Commedia dell’Arte, Mesopotamian mask balls, etc., to pervert the conditions?

In this way, the mask turns into a little multicolored flag of a universal constant specific to a being: vulnerability of inspired creatures, which we may still count ourselves toward (despite everything and maybe thank god); irrespective of all particulars and normalities. What we deem to see and decide to discern.

We recall: masks have a certain force. When tied on by humans, something’s under way. This is never merely an individual concern. Feelings, humans, and masks could treat each other to something nice again for a change. And: emotions are ecstatic – we’re indeed touching one another, without touching one another. Contact blocking and limited egress – seem to be working out right? Must be the reason why I’m king of my castle …

Masks. Things are, what they are? Depends on who you are and still want to become in times like these.

Images. Are malleable in the real: our wonderful protection is and was elaborate creation. 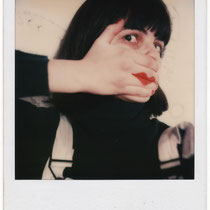 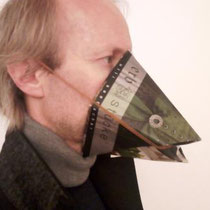 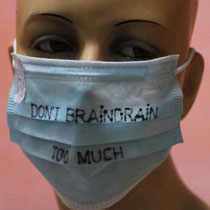 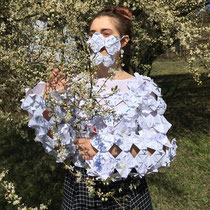 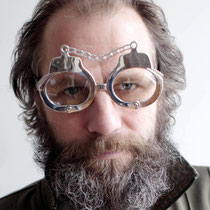 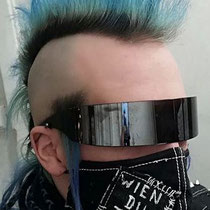 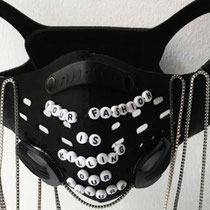 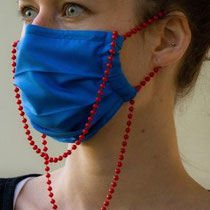 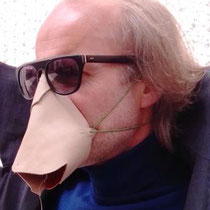 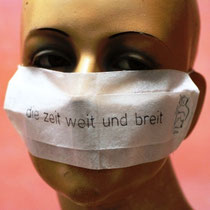